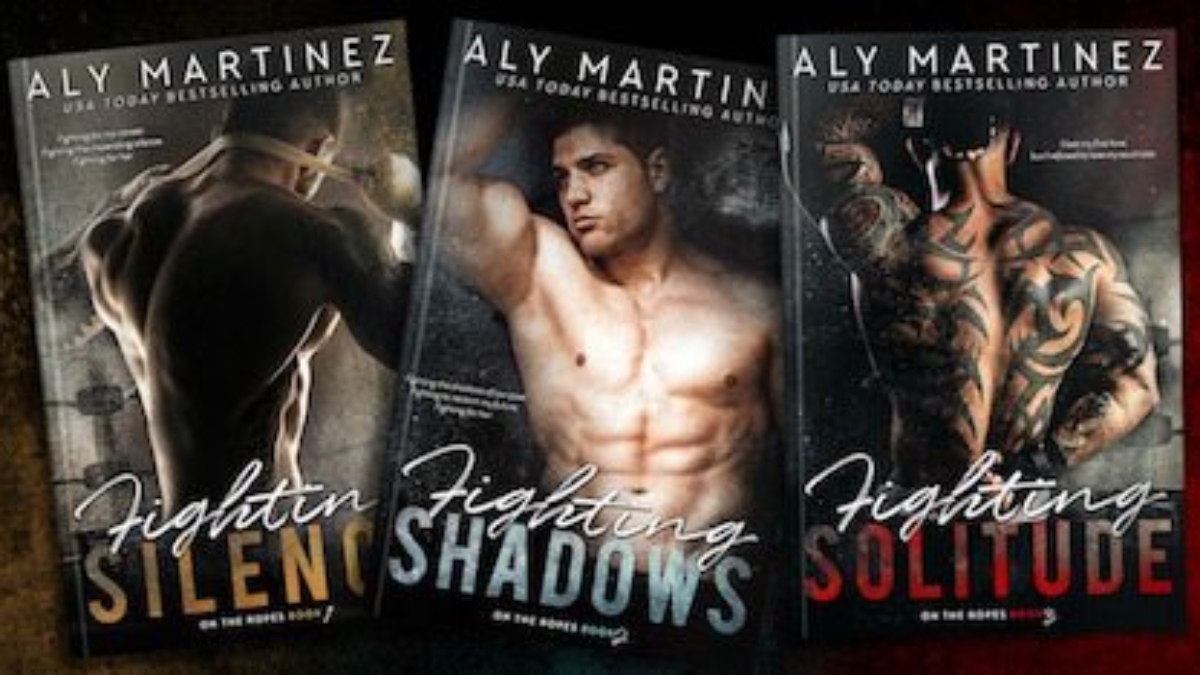 Just finished reading Aly Martinez series “On The Ropes.” I have to say that these were all fantastic reads.

Aly is an excellent writer. Her dialogue is great, her sex scenes are HOT, and she creates characters that I love. Alpha males with hearts of gold, and strong heroines. If a book can make me laugh AND cry it’s going to get a five star review and I have to say that each one of her books in the series made me shed tears.

My favorite was the first book, Fighting Silence. Possibly one of the best books that I’ve read all year. Till and Eliza meet as teenagers in an abandoned apartment that becomes their sanctuary away from the rest of the world.The story spans years but it doesn’t feel long and drawn out. It really builds the base for Till and Eliza’s romance. Till and Eliza’s story made me physically ACHE at times. Till is suffering from a genetic condition that will eventually leave him without his hearing, but that isn’t the main focus of the plot. Till has some deadbeat parents and two younger brothers, Flinn and Quarry who I guarantee you will love as much as Till.  There were so many things happening in the story, I can’t really touch on them all. I just have to say I loved everything about this book.

The second book Fighting Shadows, is about the second brother Flint, who becomes paralyzed at the end of the first book. I have to say even though it was an amazing read, this was my least favorite of the series. Maybe it’s because Flint is pining over another woman in the beginning. Had I not read the first book to understand his misplaced feelings for her, it would have been a turn off. He’s also very bitter in the beginning compared to the first book, which is understandable given his circumstances. Even with that I’d still give it five stars.

Ash, the heroine, is an amazing character. She’s kooky, charming but there were times I just wanted to bonk her over the head. From a research standpoint a few things stuck out to me because I’m kinda a stickler when it comes to getting things right about disability. One, Flint drives a wheelchair accessible van. IRL this would never be the case for his level of injury. (However I will say Quarry’s whole bit about how the van makes him look like a creepy molester is kinda hilarious dialogue.) Two, he never has any “issues” with ahem, performance. Ok, I get that if someone is a SCI incomplete they can have sexual function, but it wasn’t even touched on realistically in this book.

All in all though Fighting Shadows was still a great read that I thoroughly enjoyed.

The third and final book in the series is Fighting Solitude. I loved this one nearly as much as the first.

Quarry like his older brother Till has been diagnosed with a degenerative hearing disorder that will eventually render him deaf.

I had no idea how the author was going to pull this storyline off, and I can’t say too much because, um, spoilers.

She totally pulled it off though. Brilliantly. The author made me cry big ugly tears in this one and laugh out loud. This book ripped me apart at times. And OH MY GOD the sex was SCORCHING in this book.

The Page brothers will be with me a long time. Just start at the beginning of the series and read all three. Trust me. You won’t regret it.