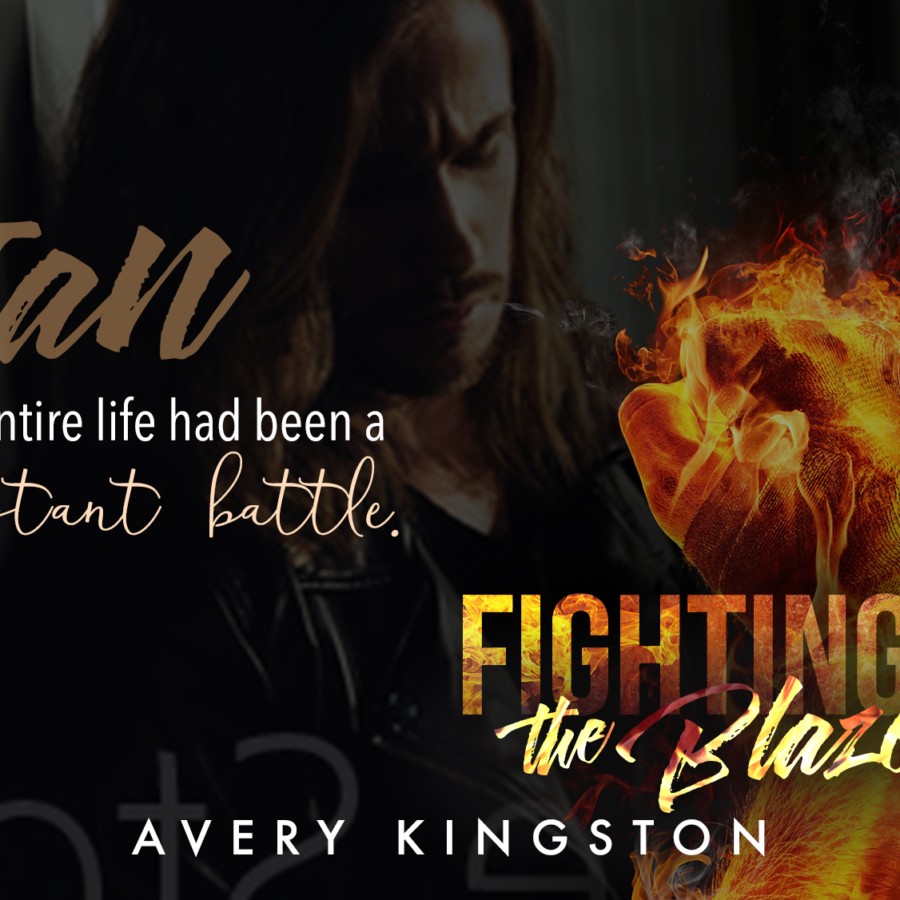 Blaze has served up some amazing comedic relief in past novels, so much so that readers were begging for his story. Well, lucky for them, I knew his story the moment I began writing him.

This fucker snaked his way into my heart right away. He’d wake me up at night shouting for his story to be told.

Blaze was a character that jumped right off the page. Larger than life, he seemed. Boisterous, loud, obnoxious, crass, irreverent…with an IDGAF attitude.

Not a care in the world.

But you see… I knew it all.

I will tell you, the name “Blaze” started out as a silly placeholder in Chasing Fire, until he told me his name. But it STUCK. Once I’d named him that it just FIT. But I didn’t want him to be Blaze just because he was a weed smoking, houseboat living, beach bum hippie. I wanted the name to have more meaning than that. I wanted there to be a purpose to WHY he’d become Blaze.

How he came to be Blaze is actually a heroic yet heartbreaking story. It’s from the song by Bon Jovi, “Blaze of Glory.”

His reason for singing that song had been two-fold; one was his sick, twisted sense of humor to make his teammates laugh, and the second was to keep the nothingness from swallowing him whole.

We learned in Smoke and Mirrors during a fantastic game of “Never Have I Ever” that Blaze was once married. And for those that know military, I can’t have a book without mentioning Jody.

“Was married once. Young, in love and so very naive and stupid.” He paused for a moment. “She left me for Jody while I was on deployment.”

“Jody is the shit-bag who sleeps with your girl while you’re deployed. Just a phrase we use in the military, Blondie.” Blaze laughed a little too loud.

Tori detected so much hurt in that sad chuckle.

In “Fighting the Blaze” we get the whole drama. You see first-hand the moment that Ian’s wife, Amber, left him. And let me tell you, it’s heartbreaking.

Abandonment is not something that’s foreign to my hero. He was abandoned when he was a kid as well.

“My meth-head mom ran off when I was eight and landed her ass in prison, leaving me with my goddamn bastard of a dad. By the time CPS figured out the shit that was going on in my home, I was way past the cute phase to get adopted by a nice suburban family. I was bounced from one foster home to the next as a teen. If there is some higher power up there, I learned way before I ever went into the military that He didn’t give a shit about me.”

So, all this history, pain and anguish has left my hero in a place where he does NOT give a fuck anymore. He lives the way he wants, because nothing seems to work out for him anyway.

So he walks around, seemingly unfazed by anything in life. Sleeping with whomever he wants, living life by no rules. (Cue my “Blaze” song by Steve Miller Band “The Joker”). He walks around, being crass and funny, it’s his defense.

I know all this sounds like a lot of melodrama, but trust me, there are so many classic laugh-out-loud quintessential “Blaze” moments in this book.

So of course, I had to make this an opposites attract enemies to lovers romance. I honestly think this book has some of the best dialogue I’ve ever written, some of the funniest scenes with chemistry that is off the charts. Pairing this “bad boy” with the sweet “good girl” was wildly entertaining to write. 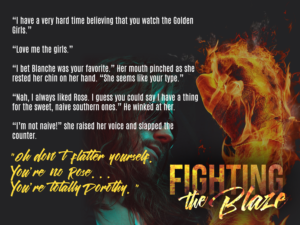 “I have a very hard time believing that you watch the Golden Girls.”

“Love me the girls.” His choices had been very limited for daytime TV back in the days he was holed up in the hospital. He spared her that tidbit of depressing info though. It was either Golden Girls or a daytime soap, and he sure as shit wasn’t about to watch one of those.

“I bet Blanche was your favorite.” Her mouth pinched as she rested her chin on her hand. “She seems like your type.”

“Nah, I always liked Rose. I guess you could say I have a thing for the sweet, naïve ones.” He winked.

“I’m not naïve!” She slapped the counter.

Yes, these two just grate at each other at first, but regardless, the sparks are flying and the chemistry is undeniable.

The thing is though, deep down, he’s a GOOD man. Brandi realizes this after some time with him. And it takes a very GOOD woman to bring this bad boy to his knees.

He could talk all day about complications. How he had to go through the entire recovery alone while dealing with a messy divorce. How the physical pain combined with the emotional pain had sent him down a hole he had to fight to crawl out of. How he’d lost far more than he could have ever imagined. And lastly, how he’d spent the last several years numbing the misery with women that didn’t ask questions, required nothing of him but to scratch an itch, and didn’t make him feel anything.

Now he found a woman that he cared enough about to let her in—someone that was gonna have to see the shame hiding under the bullshit.

So. Bad boy meets good girl, she makes him see the error of his ways, they fall in love and live happily ever after, right?

Anyone that reads my books know I’m a sucker for the gut wrenching, make-you-chuck-your-kindle-at-the-wall drama. I’m a terrible, terrible author and my characters probably want to kill me for all the twists and turns I make them navigate before they get to that HEA.

But doesn’t it make that HEA all the more satisfying? To know that these characters have survived hell and back and still find their way to one another? That in spite of all the flaws, fuck-ups and shit life throws at them that they are strong enough to make it through?

Does Blaze evolve? Yes. Does he become something he’s not? No. Does Brandi collar the beast and turn him into someone my readers won’t recognize? No. Brandi allows him the freedom to be the man he always wanted to be. The man that had been beaten down and buried within.

My biggest thing is with ALL my characters is that they need to come into their own and evolve as individuals. We don’t lose ourselves when we become a couple. My characters are always strong enough on their own to make it, but once they find “the one”? Well, then they are unstoppable.