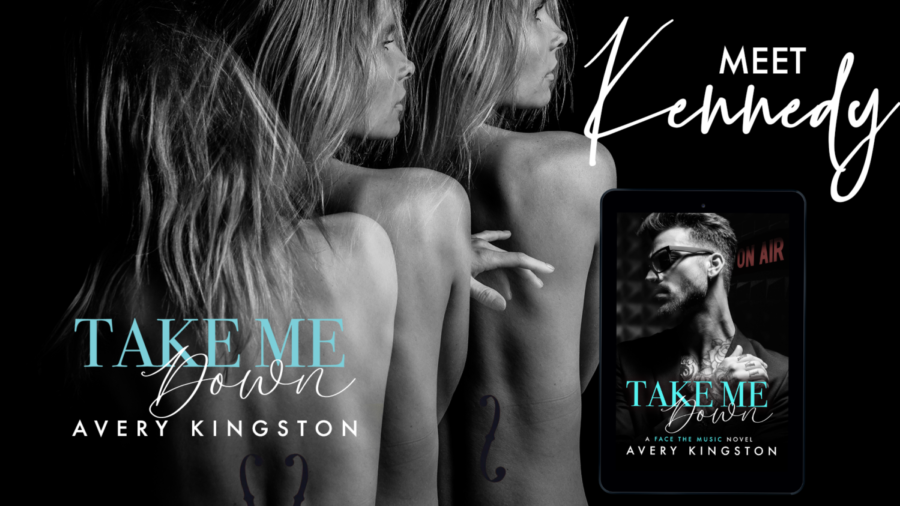 Kennedy was a tough nut for me to crack. I have to say, she’s been one of the toughest heroines that I’ve had to write to date.

The first reason, I decided to make her British. Since Silas is losing his vision, attraction to him is not the physical. I wanted to give her a saucy accent that would instantly pique his interest.

I couldn’t tell if she was mildly irritated and teasing, or downright pissed. Had to be the accent. Brits always threw me off. They had this way of packaging snarky comments in pretty paper with an enormous bow on top. “I left a note above your box,” she added.
“I didn’t see it.”
“You should check your post more often.”
“Noted.” I offered a salute, flashed her a grin, and winked. “I’ll try to mind my volume.”
“That’d be fab.” So frosty. So cold, and yet still sexy as hell because of her damn fucking dialect.

I learned a LOT. Like fanny does not mean backside, but actually well, the vag. So, when I said “He smacked me in the fanny…” I had to quickly change it (thank you beta readers!)

I knew I wanted her to be a prickly pear. Because, Like Silas, I’m a sucker for the prickly ones. I like a woman with some grit to her.

The elevator chimed and she moved toward the doors as they squeaked open. “Have a good workout, Kennedy.” I jutted my chin toward her as I adjusted the bag on my shoulder.
She snorted. “Cheers, 28B.”
Well, there you had it. Didn’t even bother to use my name.
And why the fuck did I care? I was breaking my rule number one—you don’t shit where you sleep. But for some stupid reason, she’d piqued my interest. Ever a sucker for the prickly ones.

Third, there needed to be something else that made him emotionally connect to this stranger. Silas, being artistic himself (a thespian and radio personality) and going blind, music is important to him. It’s more than his career. Music speaks to his soul. So, I made Kennedy an artist as well, a cellist.

I’d always loved the cello and thought it never got the respect that it deserved. Some would consider it melancholy, isolated, dark, and miserable—like listening to a reading of a eulogy, but not me. I found it deep, silky—like a long, seductive moan. And Kennedy made that cello croon.

Next, came Kennedy’s backstory. This was the most difficult for me to write, and the most personal. Kennedy is an addict who is two years sober.

Typically, I have a LOT of drinking in my books. A LOT. (Hell, my author banner reads, “Whiskey and Bad Decisions.”).

I always put a lot of myself into my characters. Like me, if I plop a drink into their hand their inhibitions lower, and you see more of their authentic self start to emerge.

Time to get real with you readers. In my early twenties I did a LOT of things I shouldn’t have. I did some HARD drugs. It took me quite some time before I felt comfortable to have a drink in my hand. Yes, I drink now. I also occasionally use medicinal marijuana, but never ever will I touch hard drugs again.

Even with my history, I struggled writing Kennedy. Everyone’s experience with substance abuse and addiction is different. For me, I easily walked away from the hard drugs when I was younger. I never went to rehab. I never had any withdrawals or cravings. I never had a sponsor. I never went to group meetings. Still, like her, I truly know what it feels like to long to be the person you aren’t. I know what it’s like to beat yourself up for the mistakes of your past.

I opened the fridge and found the dressing next to several beers and a couple bottles of wine. My heart sank. This was the type of setting where a normal person could sit down with their lover and enjoy a glass of wine with dinner, but not me. I wished I could have just one. But no, I was a binge drinker. Once I started, I’d drain the bottle. Honestly, I didn’t crave the drink as much as I craved rebirth.

Drinking was never really an issue for me. Still, I try to keep myself in check. Then 2020 happened. Like many others stuck at home, I started drinking more. Life was rough personally. It was just one thing right after another that hit us.

“Stepmom cut me off and kicked me out, since I was not going to uni. I moved into my boyfriend’s dinky flat. He never loved me. Just used me for my composition skills, while he toured the UK and fucked groupies. Left me with a mound of bills and addicted to alcohol and drugs. Eventually, I found a job as a teaching aide while I put myself through uni. Tried to stay sober. Then life would happen.” She ran her fingers through my hair and sighed. “My telly would break, my car would need a new radiator, setback after setback. That, of course, caused me to self-medicate heavily.”

I struggled to write. Even though I was vaxxed, I got covid, twice. I’m still suffering long-term issues from it. I’ve faced depression, crippling bouts of anxiety, panic attacks and many sleepless nights. The more my anxiety ramped up, the more I was drinking. The harder it became to write.

“Do you think that artistic people are more drawn to addictive behavior? The musicians, writers, actors…”
“Drugs don’t make artists, they break them.” She set her mug down and leaned back. “And yes, I do.”
I bobbed my head. She was right. The further I withdrew into drugs and drink, the harder it was for me to feel the music.

So, I took some time off from drinking during writing her. I’ve done this before. If I notice my tolerance is too high, and I’m drinking more than I should, I’ll take weeks, sometimes months off just to make sure I have it under control. I never want to go back to the woman I used to be.

What this did was help me relate to her better. How can I be comfortable in my own skin, without the push of liquid courage? How do I control the anxiety and self-doubt without a glass of wine or whiskey to relax?

Silas trusted me, blindly, and I nearly betrayed him. Last night after we shagged it was written all over his face, and again, at the table. It was more than him straining to see my physical beauty. It was deeper. A lovesick hopefulness in his expression, as if I alone held the keys to something extraordinary.
And it scared the bloody hell out of me.
I was not extraordinary. I was nobody. I wasn’t brave. I wasn’t strong.

Like me, Kennedy shows a brave face to the world, but inside, she’s trembling. Scared to lose control. Scared of what people will find when they see her for who she really is. She’s lonely, isolated and longs for people in her life, but after being burned so much by others, she’s guarded herself and built a fortress around her, absolutely terrified of rejection.

The fortress I’d built for self-preservation had thick, concrete walls lined in barbed wire and a sniper on the roof. When trespassers came too close, I’d maim them. But the more time passed, the more it felt like a prison instead of protection.

I wouldn’t say I’m as prickly as she is, and I like to think I control my mouth MUCH better than she does, but I am just as damn awkward. People don’t always get my sense of humor. I’m crass, and downright irreverent at times.

I lingered, shoving pastries into my mouth, glancing around the room, trying my best to look approachable. I’d never been great at striking up conversations with strangers, and something about me never gave off a friendly vibe. Typically, my social anxiety would get the best of me, my mouth would run amok, and I’d wind up saying something sarcastic, rude, or awkward.

She may not always say the right things, but I will say something about this girl, she’s witty. And thankfully, my hero is a sucker for a girl with wit.

“Damn. Shots fired,” Kay laughed as she read the Tweet. “She’s got the When Harry Met Sally fake orgasm gif underneath the image.” Her cackles grew louder. “I like this girl’s style.”

You and me both, Kay.

At the end of the day though, this girl is all heart. No matter how scared she is, no matter how much she wants to run, she can’t run from him.

Because Silas and Kennedy have something very special.

I’m excited for you to meet her.