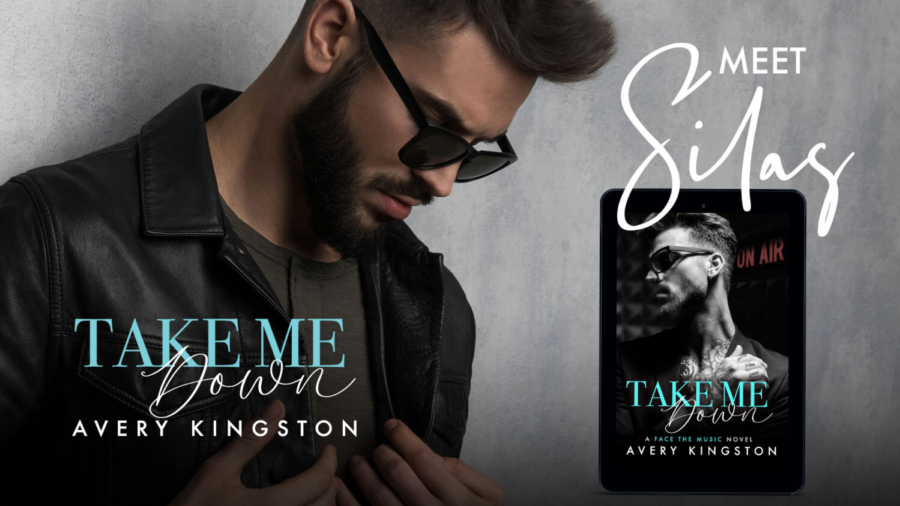 As authors, we are constantly pulling inspiration from some of our favorite stories, movies and television shows. I can’t ever seem to watch or read something without an idea spinning up in my mind how I could twist it and make it my very own.

Take Me Down was no exception. I’ve had this idea in brewing the back of my head for decades. It all spawned from an episode of Charles in Charge (one of my favorite shows as a kid). Without giving you too many spoilers, Charles gets stuck in an elevator with a woman who is blind, and he has no idea that she’s blind.

Since I’ve already written a blind heroine, it was time for me to do a blind hero. The first issue, how do I write his condition, and give it a new spin? Instead of making it a traumatic accident (what happened to Tori was EXTREMELY rare) I decided to go more toward reality of what many visually impaired people face—a degenerative condition.

“I have retinitis pigmentosa—RP for short—and there’s no cure. Other than my fading eyesight, I’m healthy. There isn’t anything else wrong with me.”

“Subjective, but go on.” I couldn’t help but get that dig in.

“At what point of knowing someone do I tell them I’m going blind?” He scratched his brow. “No matter when I decide to say it, it’s always fucking awkward.”

Silas doesn’t like to talk about it, considering he deals with it so much daily. He just wants to be seen as a man, not a blind man.

As is tradition, I researched a LOT. I read tons of autobiographies, message boards, and every piece of literature on RP that I could. I recruited a friend and beta/sensitivity reader who is visually impaired to try and get it right. Despite all the effort I put in, writing about disabilities always leaves me fearful. I want to represent the community as best as I possibly can.

That helped me think a lot about Silas, his backstory, and how I could put some of myself into him. I decided to make him an actor. A man who must get into a character’s head, understand who they are, where they came from, and why they do the things that they do.

Because of his failing vision, he “sees” more than most. Beauty and ugly are no longer visual for him, but emotional.

“Don’t think because I’m blind that I can’t see people for who they really are. I see far more than most. You have pain on the inside, and that’s not ugly. That’s human.”

Loss is a central theme in this book, and how different people deal with grief in different ways. Some people ignore it. Some people wallow in it. Some people drink it away. Because of his condition, acting roles got stripped from him. He had to step out of the limelight. He went from the stage to the screen, and from the screen to the sound booth.

“I like the morning show. It’s like a mix of journalism and theatrics, in a sense. The stage was my first love.”

“You performed?” He was damn good looking and charismatic enough to be on screen or stage.

“I used to. Not anymore.” He cleared his throat, shifting next to me.

He’s desperately trying to hold onto the career he’s got left. Does he always handle it well? No. He gets bad advice from friends and those close to him.

During my four-year run on Secrets We Keep, my agent advised me to keep my visual impairment under wraps. Yes, I see the irony there, but the acting industry was brutal, and work not easy to come by. So I kept my mouth shut and found workarounds for my blind spots. It worked, until I fucked up to the point the producers thought I had a substance abuse problem, and my character was given the axe.

Not only did I make him an actor, but I had my straight character, play someone on television who was gay. In doing so, he faced both criticism and praise. Something I also am very accustomed to.

“Let’s circle back to the industry. There isn’t much disability representation in film and television. How do you feel about able-bodied actors being cast into roles of people with disabilities, considering you, a straight man, took some heat when you stepped into a queer role?”

There is a lot of drama in this book. Like all humans, Silas and Kennedy deal with some heavy issues. It’s what makes them real. But there are so many LOL hilarious moments. I wouldn’t call this a rom-com, but it’s close. More like a romantic dramedy. Silas is not all doom and gloom. He’s come to acceptance of his condition, where he is headed, and he just wants to move on with his life and find someone to share it with. Honestly, he’s one of the funniest, most theatrical characters I’ve ever written.

“I’m not a fucking circus sideshow.”

“No. You’re a blind man who refuses to own it.” Her tongue clicked.

“Does this look like I’m not owning it?” I cleared my throat. “Step right up, ladies and gents,” I hollered, tossing my cane in my grasp like a ringmaster, “and come watch as a blind man does menial, everyday tasks, like using a computer, crossing the street, and wiping his own ass.” I gave a half-bow and a tip of my nonexistent top hat.

I’ll introduce Kennedy in another blog post, but once he meets her, she teaches him to feel again. To trust his instincts. To stop listening to the crowd and follow his heart.

Kennedy made me feel every damn color of emotion. Anger. Irritation. Curiosity. Beauty. Amusement. Excitement. Desire. In a world where you can’t see, feeling is everything.

I knew from the get-go that I wanted this to be an enemies-to-lovers book. It’s my favorite trope to write. It creates such wonderful banter and off the chart’s chemistry. So, I pitted them against each other as nemesis neighbors. Kennedy, is a cellist and teaches lessons from her home. Silas, my resident manwhore, spends his evenings…well…making a LOT of noise.

“Do anything fun?” His feet shuffled behind me.

Did he just snicker? I turned my head to him and raised a brow. “It was a lovely, quiet, relaxing weekend, for the most part. Well, other than Rey meowing all night.”

“You gonna turn me into the landlord for her, too?”

“No.” I rolled my eyes. “Rey’s meows are cute, unlike the other howling catcalls I’ve heard coming from your flat. Thankfully my ears were not privy to that this weekend.”

He laughed boisterously. “Yeah, I flew solo the past few days. Had to tug my own rope.”

I blanched. Granted, I’d done some maintenance myself, but I wasn’t shouting it from the rooftops. You’d think living under him I’d crave a drink, since he was driving me mad, but really, I was just craving him.

“FYI, trying to whack off with a cat around, not the easiest. Rey kept trying to attack my hand under the sheet.”

“You’re vile.” I held in a laugh. I wasn’t about to give him the satisfaction.

“Hey, don’t be calling me disgusting. You got yourself some bean-flicking action this weekend, too.” A smug smirk tugged at his lips as he stared straight at the elevator doors.

My jaw dropped open. “I did no such thing!” I lied through my teeth.

I wanted to sink into the floor. I rubbed my temples, saying nothing.

“How many batteries does it take to make that kind of humming?

You get such a wide range of emotions to play with, anger that morphs into desire. You’re building and building to that moment when they finally succumb to their feelings and that creates heat, and passion.

But even better than that was her scent. The first thing that drew me to her. I was right up in it, breathing it in so close I could taste it. The sweetness, the spicy, it was exotic and decadent, consuming me with lust and need—working me into a hungered frenzy. If it was the last thing I ever inhaled, I’d die a happy man.

My erection strained painfully against my jeans and with each thrust of my tongue into her mouth I pressed forward into her heat, practically dry humping her in the elevator, which did nothing to relieve my aching cock and only increased the pressure building in my pants.

“My place or yours?” I asked, biting on her earlobe. I could tell from her signals it wasn’t a question of if, just where.

She moaned. Sweet God Almighty. She was killing me. “Silas,” a throaty whisper came from her, followed by another moan. God, her voice, that accent breathing out my name. It was so fucking sexy.

“I need to fuck you, Kennedy.” I peppered kisses down her jawline. “Now,” I growled, nibbling at her neck. “You choose, or I’ll take you right here, right now.”

Silas is a very complex character with many layers to him. His vision loss is his current story, since it’s taken a nosedive, but once you peel back the onion you see there is so much more to him than his visual issues. A talented actor. A loving brother. A loyal friend. A mamma’s boy who likes cats. The geeky drama kid that grew into a hottie. But don’t let that fool you, he’s tender, but not soft. His sport of choice is Brazilian Jiu-Jitsu, and he’s totally capable of throwing down. Trust me. You’ll see it.  He’s masculine, fatherly, protective, gentle and a good man at his core (despite all the mistakes he makes).

I can’t wait for you to meet him.