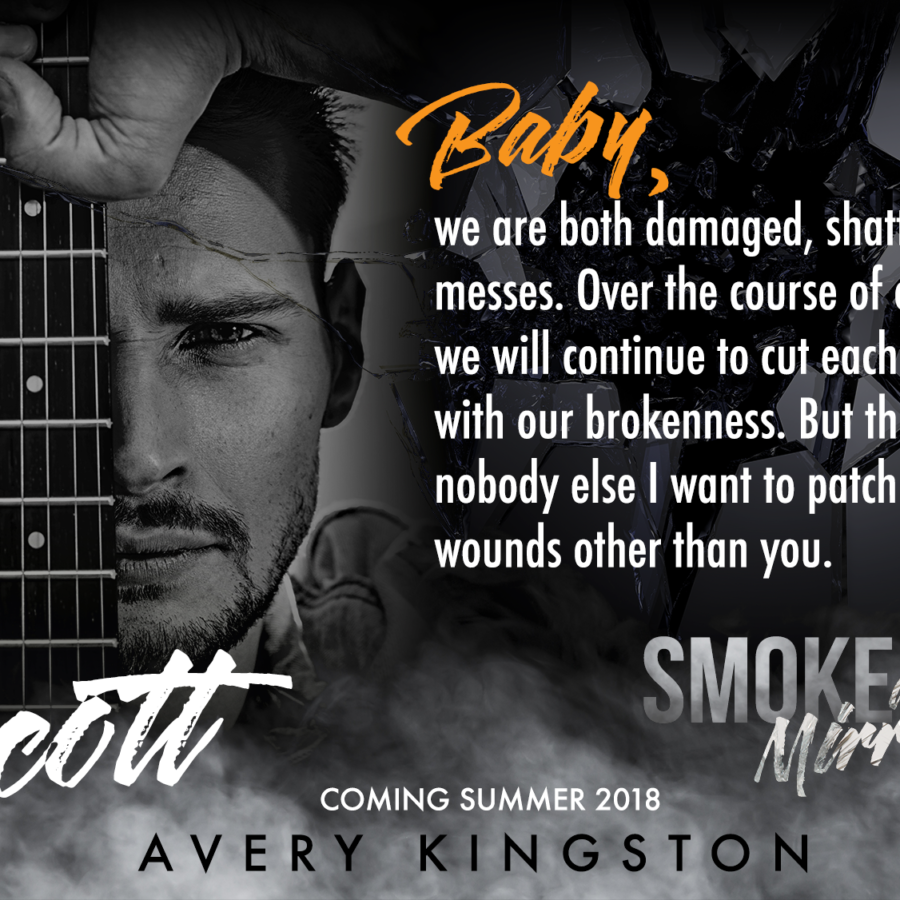 I’ve been busy putting the final polish on Smoke and Mirrors, my sophomore book, the second in my Fire and Fury series.

This book. Oh, where do I even begin?

Of course THE week that I sent over to my editor for the final proofing would be the week that I decided to read not ONE but TWO amazing books that make me doubt everything about myself.

This book… oh this book… I’ll be honest. This book has about KILLED me.

Have I mentioned before that I re-wrote this book not once, oh, not twice, not even three but FOUR (yes four) times?

Draft one of Smoke and Mirrors was a mess. Originally I’d ended Chasing Fire on a cliffhanger and I felt that I was doing a huge disservice to my readers by not giving Scott and Tori their HFN. I didn’t want a gimmick. I wanted readers to read on because they love these two as much as I do. So before I published Chasing Fire I fixed the ending. Then I knew I had to fix the second book. I had this huge weird mystery plot in book two that just didn’t work for the first half, and the second half Scott and Tori went off to Texas to meet his family. It was like two different books jammed together and it was NOT working. I really loved the second half of the book, and that is where most of their growth was as a couple. I knew that THIS is really what I wanted Smoke and Mirrors to be about.

So I rewrote it. Then I rewrote again. Finally it began to take form. It turned out to be a much more laid-back type of book.

Chasing Fire was this fun, flirty (and yes angsty) will-they-won’t-they, I’m-gonna-yank-my-hair-out type book. For some it was a frustrating read. For others, they loved the angst. I started writing Chasing Fire as a fun hobby between my husband and I. We’d write these sexy scenes/snippets about these two friends with benefits back and forth while he was on military orders. I somehow managed to make it work as a romance. I took three years to mold Chasing Fire into a novel that actually made some sort of sense. It took time to give these characters motivation for WHY they circled each other for so many years without committing. I was certain it was doomed to fail. It wasn’t the typical romance novel. I broke all the rules writing this thing and followed no formula. BUT it was Scott and Tori’s story and they eventually told me WHY they did the things they did, and for them, it made sense.

Guess what? It did hella better than I ever expected it would. Readers GOT my characters. They understood that it was really a novel about two people loving each other in the wrong place at the wrong time with life constantly getting in the way. They saw how human Scott and Tori were and loved them in spite of their glaring faults and terrible decisions.

Smoke and Mirrors was much more the romance novel I wanted to write. A novel about two broken people learning to love in a committed, monogamous, relationship. I really wanted to crack Scott and Tori open and see what happens when you put these two damaged people together for real.

It’s VASTLY different from Chasing Fire. So that of course leaves me with much lingering self-doubt. Now that they don’t have the will-they-won’t-they to keep the pages turning… are my characters enough to keep readers engaged?

Of course I hear all the rules screaming in my ear as to why my series is doomed to fail. Things like:

“You can’t have a sex scene in the first chapter… you have to build to it.”

Sorry, this is kinda my signature thing with these two. I did it in the first, and second and I plan to do it again in the third. Because admit it. Scott and Tori have some seriously HOT boinkage.

“Readers will not stay engaged and follow a series about the same couple.”

Um, ever heard of Twilight? Fifty Shades? Outlander? I mean, I could go on and on about all the RULES. Ya know what? Screw the rules. (That’s me channeling my inner Tori). I’m going to write the story in me that is screaming to be told.

Personally once I fall for a couple I could read about them doing laundry together and be completely satisfied. Not everyone is hard wired this way. But, like I’ve said before I set out to write the type of romance novels I would want to read. I guess this is because I wanted to mirror what I have with my husband in Scott and Tori. TV shows like “This Is Us” inspire me to write about real couples going through the drama of life together, and somehow still staying strong. If you ask me, a couples story doesn’t end at the HEA or HFN. Things happen. Life goes on. Trials come. The romance keeps blossoming. People grow deeper in love. I wanted to show what it was like when people try and work through their issues to grow stronger and become better people.

Scott has to really battle his nature to lead men and control. Control is what keeps others around him safe.

His ability to be in control kept him and others around him safe. It was his creed that he’d lived his life by and prided himself on. Leave a situation to the device of others and they’d fail the mission, or wind up dead. Just like the day of his explosion. He’d known that the CO’s plan was shit. He was right. If he’d been in control he wouldn’t be walking on a peg and Jones wouldn’t be six feet under.

As a soldier this is his thing. He barks orders and men just are expected to fall in line.

“I have a permit.” Scott shrugged.

Isn’t that the damn truth?

Harris did what he wanted and nobody was ever allowed to bat an eye. They all were just expected to fall in line. Except Tori it seemed. Harris’ girl seemed to march to the beat of her own drum.

Of course fate would pair him up with the ONE WOMAN who refuses to submit. This is the essence of their conflict in book two. His father wisely points this out to him:

Scott took a pull from the beer. “I never want her to feel trapped. Ever. I love how free spirited and wild she is, but I hate it at the same time.” Scott scratched his brow. “I’ve been in some dicey situations. Bullets have flown by my head. I’ve been blown up. I’ve seen my brothers die in front of me, but nothing terrifies me more than the thought of something happening to my girl.”

“I suspect she fears being out of control and loss as much as you do.”

“Oh I’m certain she does.” His eyes widened.

“Funny thing, isn’t it? How we somehow manage to end up with the one that forces us to look in the mirror—reflecting all our faults and fears.” Wayne let that hang in the air for a moment. “Makes us have to work on our shit. We have to become better men.”

This is what Smoke and Mirrors is. It’s all about growth. Growth as a couple. Growth as individuals. Scott needs to learn there is a fine line between control and keeping her safe. Tori needs to learn to trust him, grieve her losses and figure out the woman she now is without sight.

Tori has lived her life closed off. She keeps people at a distance to protect her heart from further loss. She hides behind the walls of her sexuality because honestly, deep down, she’s not near as confident as what she portrays to the world. Pairing her up into a monogamous relationship brings all these fears to the surface, and it forces her to deal with her junk that she’s stuffed down. She never really had a chance to deal with her grief in book one. I think women are going to relate to Tori much more in the second book. We get to see a much softer side of Tori in Smoke and Mirrors:

“I’m so fucking angry. The one thing that I was good at was stripped away from me.” She sobbed into Keith’s chest. “I just want my art back. Even if I can’t see it, I need to feel it in my soul, and I’m so exhausted from having to think so much, I can’t even do that.”

“Honey, I’m so sorry I called it a fun challenge. I didn’t—”

She shook her head and pulled back. “You only said that because I’ve said that a hundred times in the past several months trying to remain positive. It’s my damn suit of armor. I’ve fooled everyone. It’s all smoke and mirrors; an illusion. Reality is, I’m still really pissed.”

My worry about how Smoke and Mirrors will be received has left me up at night in a sweat of panic. I guess because Chasing Fire did so much better for a debut than I could have ever hoped for. I want to deliver a satisfying read to my loyal fans for the next book. I still give my readers the smoking hot love scenes. We still have the dashes of humor that I love so much. Tori is still as reckless as ever and it drives Scott insane. The thing is, it’s just not near as gut wrenching as the first. I felt my readers, myself and my characters needed a break from all the major drama and angst. I wanted some time to enjoy Scott and Tori as a couple before all hell breaks loose (and trust me, it does in book three). But don’t worry. It all works out in the end. That I promise.

So yeah, Smoke and Mirrors is a transition book. It’s a lot of growth and really digging into my characters issues. I’m hoping my loyal fans that fell in love with Scott and Tori in the first book will enjoy their journey in this second book. I know I’ve enjoyed writing it (even if it took me four times to get it right).