by ajkingston
with one comment
chasing firefire and fury 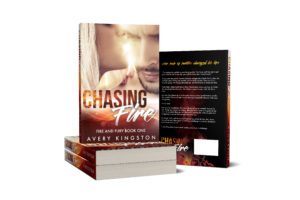 Chasing Fire is officially up for pre-order! Grab it today and it will be delivered to your Kindle on April 20th.

She may be trouble but she’s everything he’s ever wanted. Except for Tori, things are never that simple. Because Tori faces a tragedy of her own. An accident that rips her life apart, leaving her without sight and struggling to recover the woman she once was.

For Scott, Tori’s still the one he’s waited his whole life for. He’s done letting fate tear them apart. It will be a challenge to win her shattered heart once and for all.

Lucky thing Scott Harris never backs away from a challenge.

Chasing Fire is a full length romance with LOTS of steam and a HEA. Featuring a hot-as-hell alpha and a sexy artist who both have filthy mouths. Intended for a mature audience.

Tori’s heart pounded nervously as she walked down the hall toward Scott’s room. She may have gone home from the bar a week ago and cried herself to sleep worrying about him. She may have lied to Keith when he’d walked in that night and caught her sobbing. She may have spent the last week checking her phone every five minutes. She may have texted Shauna and asked her to drop some hints to Scott.

She quietly cracked open the door to his room. The blinds were drawn shut, and he lay sleeping in the darkened room. She shut the door gently behind her. It had been almost two years since she’d laid eyes on him. She crept closer to the bed, glancing him over. Slightly leaner, but still in impeccable shape. His facial hair was thick and unkempt, framed by a tube giving him oxygen.

He had some bruising and stitched cuts, but it didn’t detract from his looks at all, and she ashamedly thanked God the explosion spared his beautiful face; many of the men she’d passed in the hall were not as fortunate. She could see under the loose sheet where the mound of his left leg stopped and was missing.

An IV bag was hooked to his arm, which donned a new tattoo of what looked like a Spartan with some lettering on his forearm extending below the tribal on his bicep she was familiar with. She lightly touched his fingertips, leaned closer, squinting in the dark room to make out the words. It looked like Latin or Greek, but she wasn’t sure.

His hand gripped her wrist, yanking her down. Tori gasped, and her eyes bulged. He studied her for a moment. Gradually, his dark, cold expression faded, his grip loosened, and those soulful brown eyes softened. Her unease disappeared as a slight smile crept across his face.

They locked eyes, neither of them saying a word, barely breathing. He pulled her in close by the back of her neck and kissed her sweetly. Familiarity washed over her as his lips touched hers, and a soft moan escaped her mouth.

“Hey, you,” Scott said, his voice hoarse. He had the sultriest look in his eyes, slightly tainted with the weight of all he’d endured. He kissed her gently once more and caressed her cheek.

“Hey, Sailor.” She pulled back and studied him.

“You’re a sight for sore eyes.” His eyes raked her up and down. “You cut off your hair?” He tugged a strand of her blonde waves between his fingertips.

She tucked it behind her ear and fiddled with her earrings. Her mouth quirked up as her eyes darted to the mound under the sheet. “You cut off your leg.”

His face broke into a wide grin, and he laughed loudly, which made him cough and wheeze. “Touché.”

Tori loved the way his eyes creased in the corners when he was amused. He carried a perpetually pissed off look that some would be intimidated by, but it was that impish grin that brought out the playful Scott, the Scott she’d met that night in the bar. God, he looks good.

“Sorry I startled you, was checking out the new ink.” She nodded to his arm. “I like it. It’s sexy,” she added with a playful wink. “Although I have no idea what it says.”

“Molṑn Labé,” Scott replied. “It means ‘come and take them’,” he explained further. “Legend is that Xerxes, king of Persia, demanded the Spartans surrender their weapons, and King Leonidas responded with this phrase.”

He chuckled. “Speaking of ink, I noticed from your photo you had some yourself.”

“Yeah.” She turned and lifted her little blue casual dress, exposing a purple, lacy thong with the red lips on her right cheek at the hip. “Got this and another one I like even more.” She traced the lines of her tattoo.

“Another?” His brow arched. “I’m not sure what can top saying kiss my ass.”

She smiled. “You’ll see it sooner or later,” she said coyly. “When you’re up to it.”

“Now you have me intrigued.”

Tori pulled up a chair and sat next to his bed, kicking her feet up on the side lazily. She folded her arms across her chest, heaving a big sigh. He looked down at her sandaled feet, fiddled with her toe rings, and traced his fingers over the feathered tattoo wrapping her ankle.

“So how have you been?” He rubbed her calf with his rough hand.

“Better than you, I presume,” she said kindly with a long breath. “I’ve been good. Got into grad school at Georgetown next fall. Getting ready to move in with my friend Keith after graduation. He’s got a kicking job at the Smithsonian and has a small place in Georgetown. He’s renting me his spare room. I’m hoping he can put in a good word. My degree requires an internship at a museum next summer, right after I finish spring semester, either in London or New York.”

“Look at you, all grown up, going legit. I had no idea you had it in your bohemian blood. I’m impressed.”

“You should be. I’m kinda a big deal.” She made a silly face, crinkling her nose.

“So, who is this Keith dude you’re moving in with?” His brow wrinkled.

Tori tilted her head to the side, and a calm smile fell over her face. “Is someone jealous?” She let out a huge laugh as Scott rolled his eyes. “Keith is as gay as a row of pink tents.”

Scott laughed loudly, which made him cough again.

“I figured.” She bent over and grabbed her suede purse with the fringes on it, digging through it.

“Fringes?” he teased her about her purse, as he did about most of her clothing all the time. “You’re such a freaking hippie, Tori.”

“And you’re a wounded vet. Look how stereotypical 1960s we are.” She stuck her tongue out at him.

“Sneak in any cigarettes in there?” He nodded to her purse.

“You know I don’t smoke,” she smirked and added, “not cigarettes, at least. That shit will kill you.”

“So will explosions, but I’m still here.” He raised his palms.

She pursed her lips into a displeased scowl. From the sound of his lungs, the last thing he needed was a cigarette. She pulled out a large bag of chips. “Brought you some non-hospital food, Lieutenant Dan.” She tossed him the bag.

“Haha. Very funny.” Scott caught the bag. “Funyans. Fancy.” He opened the bag and popped one into his mouth.

“Oh, don’t act like they aren’t your favorite. I remember.”

“That you did.” He grinned smugly. “Burgers are also my favorite.”

“Hey! I’m a poor, starving artist living off my meager earnings from selling my paintings.” She leaned over and grabbed a chip from the bag and tossed it into her mouth. “That bag of chips was the last few dollars in my wallet”—she crunched on the chip—“and out of the goodness of my heart, I spent it on you. I probably won’t eat the rest of the week now.” She licked her fingers clean.

“Well, I guess I better share. I can’t have you starving all week. Get over here, beautiful.” He patted the mattress next to him.