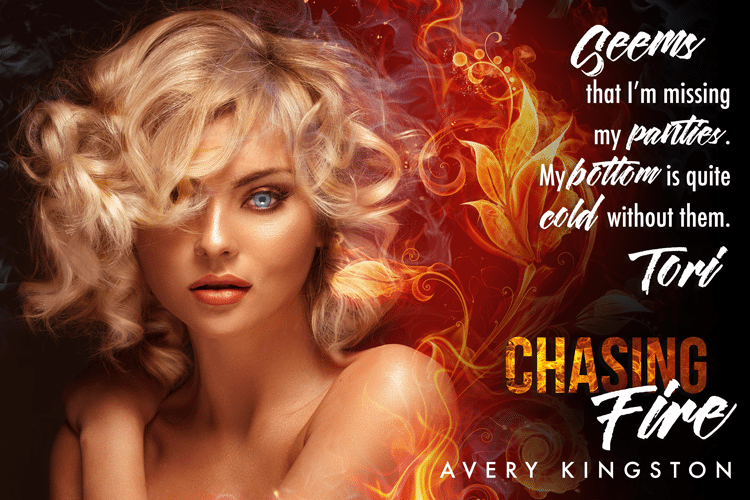 Last week I was having a conversation with my husband as to when it would be best to share Tori with the world.

Me: (to my husband) So check it. I made this great graphic of Tori. I just don’t know when the best time to share it is.

Him: Next Wednesday. It’s a holiday after all.

Me: (stares at him blankly)

(Yes, my husband put it on our Google calendar. Just in case you were wondering.)

So. All that said let me tell you all about Victoria Johnson aka Tori (and don’t EVER call her Vic, unless you are her bestie Keith).

Tori let out a breath and kept scanning the crowd. Her eyes stopped on a muscular, sandy haired hottie with hair almost to his waist. “Him. The waiter.” She pointed toward the table a few rows over.

“You mean Tarzan?” Keith sighed. “It’s like you don’t know me at all, Vicky.”

Keith was the only one she’d ever let get away calling her Vicky. She always went by Victoria at work and he shortened it to Vicky the night they met and it stuck. Victoria or Tori she allowed, but never Vicky-except for Keith.

“What’s wrong with him?” she protested. “He’s hot if you ask me.” If they weren’t in a gay bar Tori may have done some flirting with him herself. It was going to be a dry night for her tonight she realized as she peered over the sea of attractive young men.

Yes. Tori is wild uninhibited in her sexuality. Some would call her promiscuous, I prefer to call her sexually liberated. It’s time to get over the slut-shaming. Girls CAN and DO enjoy sex. Even KINKY sex.

Scott trailed his fingertips down the curve of her spine all the way to her ass, pulling her cheeks apart exposing her back opening. A grin stretched his lips. Would she let him get away with his filthy fantasy?

What the hell, it was worth a try.

He took two fingers and glided them into her pussy, getting them nice and wet for where he was headed. Her back arched as she screamed his name into the sheets that were now balled up underneath her. He pulled his fingers out, gliding upward, tracing the outline of her opening with his fingers that were wet with her juice. She tensed at first but didn’t protest; in fact, she lifted her bottom higher-inviting him to do as he pleased.

“Do it!” she said impatiently.

(He always waits for her to always give consent).

Scott knows there is more beneath her surface. He knows Tori is much more than a sexy vixen. She’s an artist; through and through. She’s got a wild heart and a gypsy soul. She loves beauty and knows it comes in all forms. When my hero (Scott) loses his leg in Afghanistan they have the following exchange:

She pulled back and rubbed her fingers gently over the stitched cuts on his face.

“Those are gonna leave a mark.” He chuckled wryly.

“Scars are sexy.” Her mouth wrinkled into a slight smile. Lord if her blue eyes weren’t the warmest thing he’d ever seen.

“Not all of them are.” He glanced at his stump under the sheet and rolled his eyes.

“Says who?” She furrowed her brow. “Society? Fuck em. Own that shit.” She nodded to the sheet. “You, Scott Harris, can make anything sexy.” She kissed him again.

The loss of his leg never defined him, it was just part of him. She sees Scott for exactly who was and always will be. Masculine. Strong. Sexy as hell. Beauty is about MUCH more than what lies on the surface. (Although the fact that he’s ruggedly handsome doesn’t hurt).

After Scott’s injury Tori stays by his side and heals his heart. She brings him back to the man he was, refusing to let him wallow in self-pity.

Tori will do anything for those she cares for but her walls are high and her guard is always up. She trusts no one but herself. Slowly Scott chips away a her walls brick by brick.

She is the one he wants to spend the rest of his days with. Problem is fate always has a way of wrecking his best laid plans.

I’ve made it no secret that Tori faces a tragedy of her own. There is no big reveal because we find out in the prologue that Tori is blind. An accident rips her life apart, leaving her without sight and struggling to recover the sexy woman she once was.

(Yes, the blind artist trope. So cliche. I know. Don’t lie. You know you love it. At least I poke fun at my own cliches.)

“I’ve devoted my whole life to art, a visual career. Not just that it’s in my soul. I’m the tragic blind artist.” Her words dripped with sarcasm. “This is so fucking cliché it’s like I’m a god-dammed after school special or something.” She laughed nervously.

Tori is notorious for covering up her pain with humor. She doesn’t want people to see what’s inside. 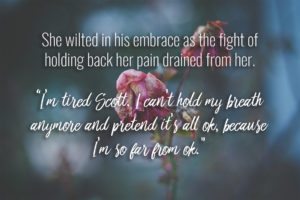 She hides behind her strength. It’s her mask to the world that protects her. (Scott of course knows this.)

She also hides behind her snarky sense of humor.

“Hey, you know me, I never half ass anything, even going blind apparently,” she feigned pride. “Well I better get going. I have a very full day of sitting in the dark and listening to Metallica’s Fade to Black.” She laughed a little too loud her crass joke.

She never takes herself or her disability too serious. She doesn’t want it to define who she is. She wants to be the same sexy, mischievous girl she always was. (To all her O&M teachers dismay she refuses to stop wearing heels.) 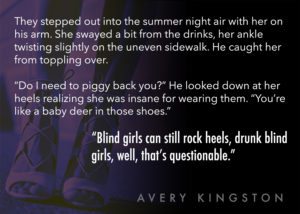 I tried very hard to not make her a “Mary Sue” character. (You know, the character that is just everyone’s dream.) I wanted her to be flawed and realistic, but not SO flawed that people hate her. I wanted her to be strong, but not a bitch. (Let’s face it writers, we all know how readers will rake you over the coals for an unlikeable heroine). I wanted her to be most of all REAL. Someone that every girl could possibly relate to. I wanted her to be quirky, strong, funny, (and in book two we realize she’s actually quite insecure).

“That girl of yours is something else, Harris,” Chief said. “Smart as hell. Hot as fuck too.”

“Yeah, it’s rare to find someone who can hold her own in a cocktail dress at a DC fundraiser, and dance topless on a picnic table in Texas while downing Jack.” Scott smiled proudly.

Tori doesn’t play into gender roles and stereotypes. Tori doesn’t fault other women who are girly. She also isn’t intimidated by a man being a man. He can let the full weight of his masculinity into the room and she’s perfectly ok with that.

She could adapt to whatever social group she was around it seemed. Chad had seen her hang now with what some would consider the lowest in society, himself included, but also knew she worked in that fancy circular building he could see in the distance. The girl was a chameleon.

This is what Scott loves about her. She’s unlike anyone he’s ever met. Some days she’s a breeze and other days she’s a hurricane. I won’t spoil for you HOW they get to their HEA. (Yes we all know the HEA is coming. This IS a romance after all. But in romance it’s about the journey, not the destination).

It’s a saga full of loss and growth for them both (with lots of steam along the ride). I LOVE Tori’s character arc. As an artist who loses her vision she has to learn to find the beauty in life in other ways. She begins to realize that years of meaningless sex is no longer gratifying. Hiding behind the walls of her sexuality becomes quite lonely. She longs for more. 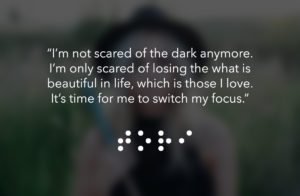 But this is what makes their story even more special. Scott and Tori understand each other in a way that nobody else could. They truly are best friends with benefits. Fate may have ripped them apart several times over the years, but it also has a way of working out things exactly as they are meant to be.